An Intro to Alpacas

The Alpaca is a gentle, alert, intelligent and curious animal, raised in herds primarily to grow a fine, high-grade natural luxury fiber used in comfortable clothing and textiles. Alpacas were created and domesticated through selective breeding practices by Andean people that existed before the Incans, before the Roman Empire, and even before the Egyptian Pharaoh Tutankhamen. The alpaca fiber in ancient Incan culture was reserved for royalty and considered more valuable than gold to the Incan people.

Alpaca hair or fleece is a luxury fiber similar to Cashmere from goats or wool from fine-fiber sheep breeds like Merino. Imported from South America to the U.S. for breeding stock from the 1980s until 1998, alpacas are a “Green” environmentally friendly livestock that produce sustainable fiber with amazing natural properties. Alpacas grow fleece in the widest range of natural colors of any fiber-bearing animal – 16 natural colors recognized in the U.S. and 22 in South America.

Like sheep wool, alpaca fleece is naturally fire retardant. Like cashmere, alpaca can be exceptionally soft, lightweight and warm, without the itch often felt with wool. Alpaca fiber contains virtually no grease making it naturally hypoallergenic, and thus avoiding the need to use harsh or toxic chemicals typically used to scour sheep wool prior to milling. Also, alpaca manure is a true organic fertilizer, easy to collect from communal piles, compost and apply to gardens with an often obvious boost in plant growth and vigor.

Alpaca fiber grows in a wide range of fiber diameters, measured in microns, which offers both benefits and challenges. Benefits are found in the versatility of fiber uses; challenges incorrectly identifying (grading) the fiber and preprocessing (sorting) for consistency. Alpaca fiber can be finer than cashmere with micron ranges as low as 14-16 for ultrafine, delicate woolens, which is comparable in fineness to the alpaca’s wild ancestor the Vicuna. Or alpacas can yield fiber in low to medium grades of fineness for soft garments worn next to the skin. Yet some alpacas’ fiber can measure over 30 microns, producing a coarser, durable fiber for use in carpets, rugs, insulation, and so on. The challenge is in sorting and grading the alpaca fiber for appropriate uses, and in selecting breeding stock for improving desirable fiber traits.

Alpacas are recognized by the US Federal Government as Livestock. The alpaca is an endearing animal, larger than a goat but smaller than other farm animals like cows or horses. Alpacas generally weigh between 105 and 185 pounds (48-84 kg) full-grown, and measure 32-39 inches (81-99 cm) high at the withers (shoulder height). They are enjoyable to watch grazing, sunbathing, pronking and interacting. Most alpaca breeders value their animals for the fiber they produce, and the simple enjoyment of having alpacas to watch in the pasture or back yard (graze alpacas only in organic yards with nontoxic plants).

Their diet consists mostly of hay, pasture/orchard grass, fresh water, plus mineral and grain supplements specifically formulated for alpacas. During the cold months of our Great Lakes winters, many alpaca breeders feed more hay, perhaps feed some alfalfa/grass hay, and offer extra free-choice minerals and vitamins. In their native Andean mountains the climate typically ranges from sunny upper 60º F days to just below freezing most nights. Alpacas in South America graze on sparse low-protein grasses and ingest key minerals from the rocky terrain – minerals we must feed as a supplement in N. America. The terrain also wears down the alpacas’ toenails on their padded feet, and their teeth as they graze. In spite of the alpaca’s delicate appearance and gentle disposition, they are hardy animals that have adapted to survive in harsh conditions and outside their native mountains.

Alpacas raised on U.S. farms don’t require much special care but do depend on their owners to provide a safe environment, proper care and an understanding of their alpacas’ needs and unique behaviors. The alpaca is a modified ruminant with three stomach compartments; it converts grass and hay to energy very efficiently, eating less than other farm animals of comparable size, even sheep. On average 10 alpacas consume about 1 small square bale of hay per day, depending on hay quality and palatability. The alpacas’ valuable fiber is shorn once a year in spring or early summer. The fiber is typically used in a breeder’s own fiber arts or sent for mill processing, sold to other fiber artists, or submitted to fiber co-ops to support a larger supply chain. Organizations such as AOA and MI Alpaca exist to help farmers promote and market their alpacas and fiber products.

There are two breeds of alpaca: the Huacaya and the Suri, with the Suri being rarer than the Huacaya on a global scale.

Other basic facts about raising alpacas: 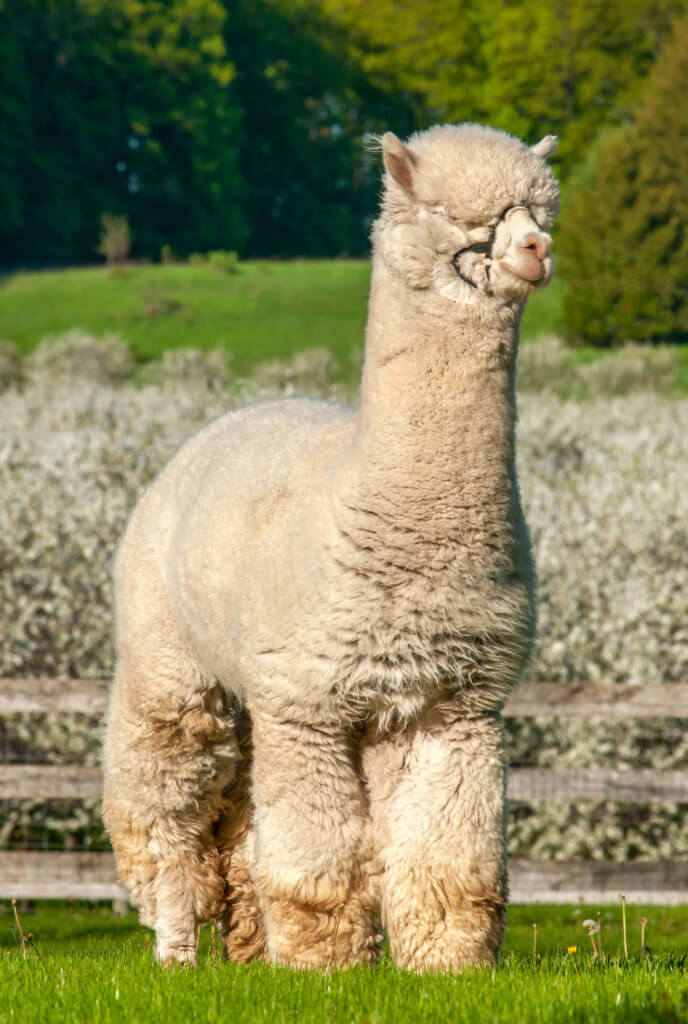 When people think of alpacas, they often envision the Huacaya. Huacayas (pronounced wa-KAI-ya) have the fluffy teddy bear appeal that many associate with alpacas and are the more common of the two types of alpacas. They comprise about 80% of the U.S. alpaca population.

These beautiful animals are characterized by their dense, fluffy fleece. The fiber grows outward from the alpaca’s body and is so thick and crimpy that it forms a protective blanket of fleece all around the animal giving them their “cuddly” appearance. The fiber is soft and strong and generally crimpy throughout, and ideally has a natural brightness that reflects light.

At the microscopic level, the scales on each follicle of the hair of the Huacaya’s fiber are irregular and slightly serrated. Though still smoother than sheep wool, which has tiny barbs, the alpaca’s small scales help fiber “grip” in processing and take dyes well. When commercially processed, Huacaya fiber can be processed either using the woolen or worsted process and produces a soft, lofty thread or yarn. It’s ideal for knitted wear or soft tweeds. Huacayas come in a wide array of natural colors with white, fawn, brown, and black being the most common.

Besides the difference in fleece type, the heads of Huacayas and Suris look different. Alpaca breeders occasionally carefully trim the fleece around the eyes for animals with heavy fleece covering to allow them clear vision. 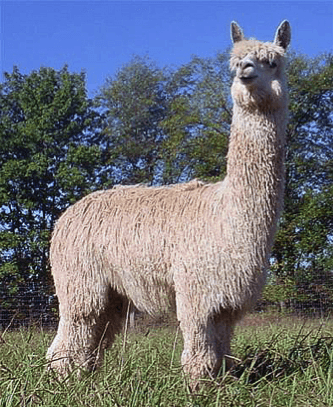 There’s nothing quite like a Suri in full fleece, with its fiber locks blowing in the breeze. Suris (pronounced SUR-ee) are the rarer of the two types of alpacas and comprise about 20% of the U.S. alpaca population.

These elegant animals are characterized by their draping silky, often twisted locks. The fiber hangs down in long locks of hair, rather than looking wooly and puffy like Huacayas.

The Suri fiber is slick and straight with little or no crimp, and ideally has a high degree of luster. At the microscopic level, the scales on a follicle of the hair of the Suri fiber are smooth-edged and one-directional giving it this slickness. The scales are lower in height, and fewer per inch giving the fiber a smooth, slick feel and shiny light reflection.

When commercially processed, Suri fiber is almost always processed using the worsted process, which results in a thin, sturdy thread that is used in making gabardines and crepes. Suri fiber brings a premium price on the world market because of its scarcity and unique characteristics.

Because of the slimming drape of the fiber, Suris often look more delicate than their Huacaya counterparts, but they are every bit as well boned and muscled. Weights and proportions are about the same for both types of alpaca, although Suris tend to have more muscle across their backs.

Traditionally, most Suris were white, but U.S. alpaca breeders have been selectively breeding since the animals were imported to the United States to produce colored Suris and now many colored Suri alpacas are available. True black remains one of the most desirable colors for textile processing, second to white which allows fibers to be dyed other colors.

Want to talk an association member? Reach out and let us help. Contact Us